Half zebra, half donkey

A zedonk is an animal in the horse family that is a cross between a zebra and a donkey. In one way, zedonks are very much like mules; they cannot reproduce. In order for a zedonk to be born, a female donkey must mate with a male zebra.

The zedonk is a very rare animal. It is so rare, in fact, that most people will only ever see them in photographs, documentaries, and news clips.

There have also been some less accidental cases in which zebras and donkeys have been intentionally bred by zoos in order to birth zedonk foals. In addition to being found in some zoos, zedonks may also be found in nature. The animals sometimes appear in areas where donkeys and zebras live in the same or neighboring regions.

There is some variation in the markings found on a zedonk, but it is common for the animals to have a brown or buff-colored body with legs that are striped with black and white. There are some cases in which the body of a zedonk is quite dark, even close to black in color. There are also color variations in which the stripe pattern of the zebra is faint or muted within the body of the zedonk.

The term “zebroid” is used to define a few types of animals that are zebra hybrids. In close relation to the zedonk are the zorse and the zony. A zorse is the product of a zebra and a horse coupling. A zony is the product of a zebra and a pony coupling. These animals bear some resemblance to a zedonk such as the partial or muted coloring of a zebra. Just as with zedonks, these animals also have specific requirements when it comes to their parentage in terms of which parent is the zebra and which parent is the other member of the horse family. 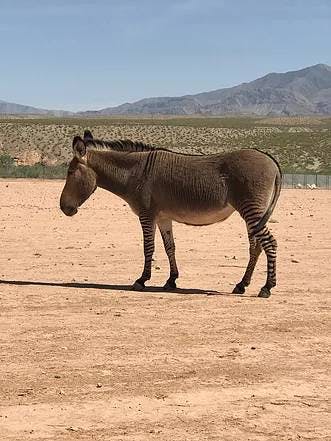