Watch me use my tail as a hand

The bare-tailed woolly opossum (Caluromys philander) occurs throughout northern and eastern South America. All have large, nearly naked ears, a long prehensile tail, and either a median stripe on the face or bold markings on the back. The tail is not well furred in the bare-tailed woolly opossum, but in the other species it is extensively furred, often to the tip. All but the bushy-tailed opossum have a pouch.

They are solitary and nocturnal. Foods include fruit, flowers, insects, eggs, birds, and other small animals. True woolly opossums have up to seven young in a litter. They also have the longest life spans of all American opossums; one bare-tailed woolly opossum lived 6 years 4 months in captivity. 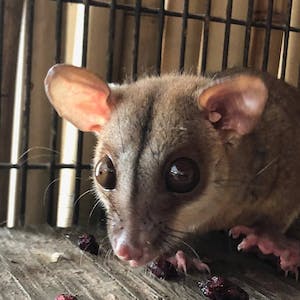